John Lewis will be hoping for success like those of previous years as its Christmas advertisement has just been released. Early indication shows it is going to be a smash hit, trending on all the major social websites.

The Christmas advert has become something of an institution with their blend of fluffy characters, celebrity soundtracks and heart-warming twists. Amid increasing hype around John Lewis’s seasonal ad, which has come to mark the beginning of the Christmas shopping season for many, the department store will aim to use its profile to significant sums of money for the charity Age UK.

Last year’s Christmas advert was about the friendship between a boy called Sam and his penguin Monty. This has been stored in the deep freeze.

Created by the same advertising agency, adam&eveDDB, the latest John Lewis instalment plays on the theme of loneliness and introduces a little girl, Lily, who is desperate to make contact with a solitary man who lives on the Moon – “Man on the Moon”. A lonely old man living in a crater on the moon is the unlikely focus of John Lewis’s Christmas advert this year, as the department store puts a charitable spin on its latest multi-million-pound campaign.

The extended two-minute mini-movie begins with Lily gazing longingly at the stars from her family telescope. In the run-up to Christmas, she spots an old man, wearing scruffy clothes and living alone in a little shed on the moon. She tries to contact the man, by waving, firing messages via an arrow. With no joy.

Then on Christmas Day, we see a parcel – attached to some helium balloons – land at the feet of the old, and rather lonely, man. It is a present from the girl: a telescope, which he then uses to spot her back on earth.

This year, the song is Half the World Away, by Oasis, (famously used as the theme music for the Royle Family sitcom). It is covered by Aurora, a 19-year-old Norwegian singer, who gives a John Lewis-textbook breathy performance.

Whether viewers think it tops the ones of recent years, remains to be seen. What do you think is the best John Lewis advert produced? Is it as good as Monty the Penguin or the Bear and the Hare? 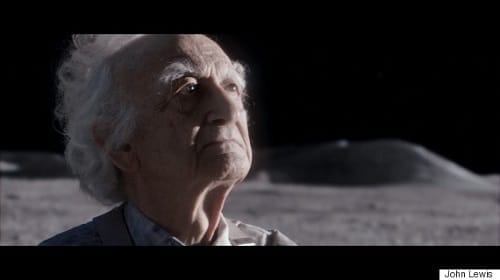