The Black Friday mayhem is about to commence

An American holiday tradition, marking the beginning of the festive period, which now starts weeks before you open the first door on your Advent calendar, Black Friday falls on the day after Thanks Giving each year. Retailers kick start the Christmas shopping period with their Black Friday sales, offering customers the best deals they can expect to see all year.

The concept was relatively unknown in the UK until recent years, despite various attempts by American owned retailers to introduce the idea, but in 2014 it was picked up on by UK retailers who, understandably, wanted to get in on the action, boost sales and generate a spending spree to rival our American cousins. 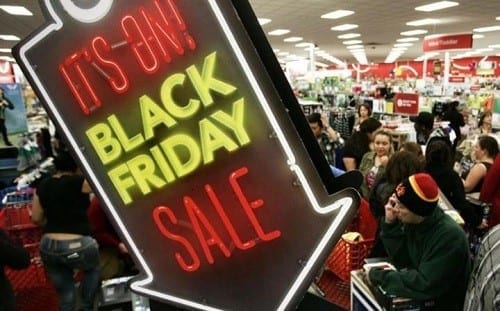 The retail festival is loved by consumers, many will hold out on making large purchases to see how much they can save on the big day, and they expect big savings! Retailers are prepared to offer customers the best deals they possibly can on high priced items, driving footfall in their stores at a time when, with big retailers at least, even the media has a curious eye on sales figures.

The event is mutually beneficial, customers are happy to save some hard-earned money, and retailers are happy with the boost to their sales. Despite this, the day has attracted negative press over the last few years, with some shopper’s poor behaviour at the heart of a news storm.

Retailers criticised for lack of security

Retailers were criticised for not laying on enough security to deal with the over-excited, adrenaline-filled shoppers, which led to some stores, such as Asda, announcing they wouldn’t be doing in-store Black Friday deals in 2016.  Don’t fret though, Black Friday is still going strong in the UK and you can expect to see some amazing deals, with some retailers extending the sale period over the weekend and into the following week.

If you watched the video and don’t fancy finding yourself in a similar situation, there’s always online. Although Cyber Monday, falling on the Monday after Black Friday, has been heralded as a shopping event in its own right, you’ll be sure to find fantastic deals on retailers websites from Black Friday onwards.

Make sure you get the most out of Black Friday!

If you’re in need of a new TV, Laptop or Tablet now’s the time to start looking, get a good idea of what you want and what the regular price is, this way you can make sure you’re getting a good deal on something you actually want.

Start to get a list together of what you’d like to get people for presents this year, then you can check in the Black Friday sale to see if it is any cheaper.

Don’t forget, it’s not just retailers offering amazing deals, if your broadband or TV package is up for renewal soon, you could get a fantastic reduction and carry those savings through the year with a cheap contract.

We’ll be offering some fantastic Black Friday deals at Valentino’s, including 50% off selected products, and a 20% discount code will be available across the site if you use “BLACKFRIDAY” at the checkout.

Have a look for what you need here, so you’ll be ready to grab those bargains on Friday.

What have you got your eye on this Black Friday?

Let us know how you get on if you find any amazing deals share them with us and we’ll see who gets the most unbelievable deal of the year!