Suzanne Heintz has proved that the key to a life of happiness doesn’t necessarily lie in landing that perfect partner, having created her own artificial family no less than 14 years ago. It sounds like a pretty ludicrous concept on the surface, but as an artist, Ms Heintz set about creating a photographic timeline of her life featuring herself and her dressmaker’s mannequin family. 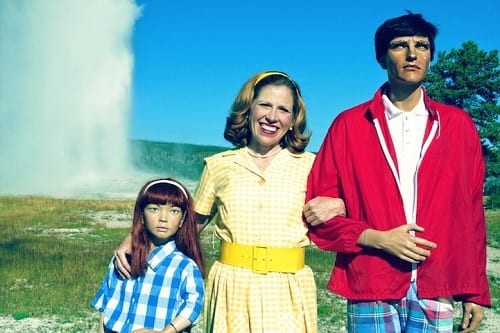 That’s no typo – she’s effectively and literally built her family from retail display products!
For over a decade, she, her dressmaking dummy husband and tailors dummy tykes have been snapped in all manner of key life moments, from family holidays to her fabricated wedding day.

Her latest work – The Playing House Project: Life Once Removed – is every bit as entertaining as it is genuinely thought-provoking.

“No one actually used that out of date word, but, what they were driving at was that I was a “Spinster”, and I got tired of hearing about it. Even my mother must have thought she was setting me straight when she said: “Suzy, there’s nobody perfect out there. You just need to PICK somebody, if you’re going to settle down,”

“I snapped back, ‘Mom! It’s not like I can go out and BUY a family! I can’t just MAKE it happen!” But then, I found a way. I bought a beautiful family… of mannequins. I decided to start a photo project out of the Kodak Moments I’d capture with my new Store-Bought Family.”

And so it started – she took what would otherwise have lived their lives as shop fittings and brought them to live in a rather novel manner.

Her work is underpinned by humour and satire and isn’t designed to in any way disturb viewers. However, she admits her inspiration originated from her Mormon upbringing, during which she was exposed to a culture in which the woman’s place as homemaker and mother is both important and celebrated. 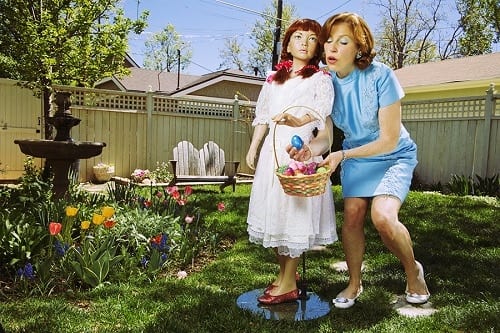 “My own home was the backdrop for the first images,” she wrote. 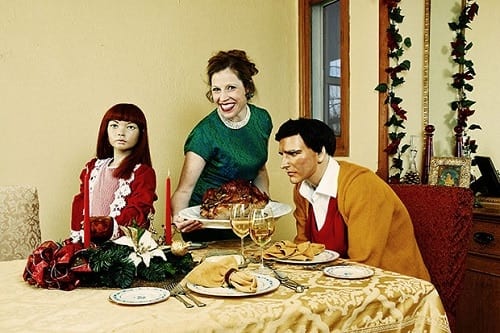 “Over the next decade, scenes of an idyllic home life eventually extended into a series of holiday greetings, as a satirical response to annual family photo cards. However, the project took a turn after taking them on a road trip. I saw the potential in shooting in public,”

“Seeing me work with the mannequins is such a peculiar and funny thing to witness, that people are immediately disarmed. As soon as that happens, their mind is open and impressionable,”

“Using humour, paired with shock, allows my message to penetrate, and the work can have greater impact. The aim is to get people to reconsider their stubborn allegiance to traditional life expectations,”

“We are somehow never enough, just as we are. Even if we do have a finger in each of those pies, there is never enough time to do any of them to our satisfaction. We are constantly set up by our expectations to feel as though we are missing something,”

“Rarely does anyone’s life turn out the way it was expected, and if by some miracle it does, what they expected isn’t what they thought it was,”

“I’m simply trying to get people to open up their minds, and quit clinging to outdated assumptions of what a successful life looks like. I want people to lighten up on each other, and themselves, and embrace their lives for who it’s made them, with or without the Mrs., PhD. or Esq. attached to your name.”