Sainsbury’s has apologised and removed a mannequin dressed as a character from the film “12 Years a Slave”. The mannequin was on a promotional stand selling DVD and Blu-ray copies of the Oscar-winning film. 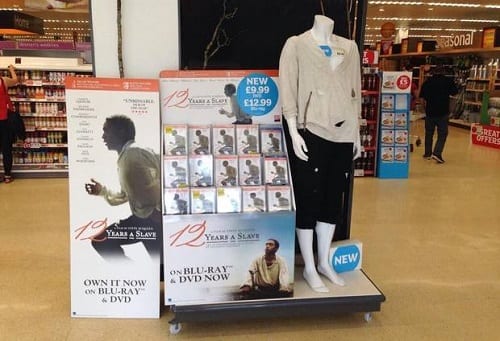 The mannequin at a branch in Oxford wore a ripped shirt and black trousers – and even had a twig in the pocket.

The clothes, similar to those worn on the cover of the film by the main character, played by Chiwetel Ejiofor, featured a sticker saying ‘new’.

It was brought to the public’s attention when a Twitter user took a photo of the stand and uploaded it to the social media site which then went viral on all social networks.

Amid the backlash, Sainsbury’s issued a swift apology. The display has now been taken down. @SainsburysPR wrote earlier “We can only apologise. It’s been taken down from the store. Clearly should never have gone up”.

What do you think of the “slave mannequin” as seen in the supermarket’s Heyford Hill store?