Lingerie store La Perla has been forced to remove a mannequin from its New York store after a customer complained about its skinny, anorexic appearance. 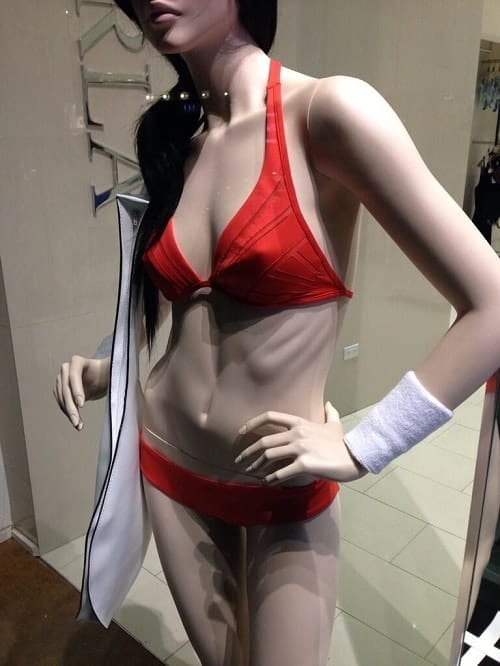 The mannequin, shown in the image above, was photographed by Michael Rudoy on Monday, May 12th 2014 and quickly caused outrage when it went viral on Twitter and other social media networks.

He wrote on the social media site: ‘How does #LaPerla think ribs on a mannequin is ok?!’ Only hours later the shop display mannequin, which was wearing a red swimwear set and clearly showed a jutting rib cage and concave stomach, was taken down by a member of staff.

As well as removing the mannequin, La Perla got in contact with Mr Rudoy over Twitter. “Thank you for bringing this to our attention, it’s something we take very seriously and we are looking into it further,” they said.

Recently we published a blog post titled “Mannequins For Change” All around us, people are different. To look through the eyes of the fashion industry, all we would see is tall, skinny girls whose clothes fall in all the right places. It is obvious that in the real world, not everyone is like that. We are all varying heights, weights and abilities. For those that are not the perfect size, even walking through a shopping centre can be an overwhelming experience.

Take a look at that blog post as it describes in great length some of the issues raised here.

It is not just their weight that is the problem with mannequins. Those that are visually disabled, and who struggle on a daily basis, are sick of being called ugly by the generic image of a beautiful woman that is repeated over and over again, no matter the store. Things are changing, though. A Swiss ad agency called Pro Infermis waded in on the debate and it opened our eyes to the superficial nature of the society we live in. The video is aptly called Who is Perfect?

Lets hope we don’t find any of these anorexic shop mannequins across the UK…..