We have kept you up to date with developments of the new Tesco Superstore local to Valentino’s Displays and it has just opened in Fareham Town Centre, Hampshire. We mentioned back in September that the site was progressing well and set to open on target as planned for the end of this year. 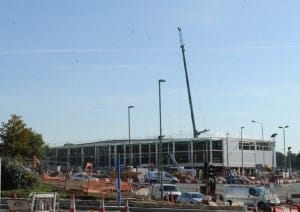 4000 applications for the 187 new staffing positions

Well since that time thousands have applied for positions at the Tesco store, a staggering 20 people have applied for each position so there is a wealth of talent that Tesco has at its disposal to recruit. Tesco received 4000 applications for the 187 new staffing positions available for the 49,300 sq foot supermarket. Some staff will be moved from other sites to fill a total of 270 vacancies.


Quay roundabout which is very near to the new supermarket has been totally revamped to ease congestion in and out of Gosport and around Fareham Town Centre.

The store will open from 6 am on Mondays and remain open for 24 hours a day until midnight on Saturday. It will then open from 10 am until 4 pm on Sundays.

People who suffered locally from the disruption and noise due to the new supermarket have been given compensation because of workmen working throughout the night to ensure completion was on time but also because it would have been a nightmare if a lot of the work was carried out during the busy working day with traffic.

Workmen worked until 4 am however disgruntled locals have suffered sleepless nights because of this. Now letters of apology and a £20.00 Tesco voucher have been sent to the homes in the local area most affected.

We will follow with anticipation whether the compensation is deemed good enough for those affected with the store opening and the lack of sleep they have endured but we feel that Tesco had very little choice and most people would accept that roadworks had to be carried out at night so what can they do?

Certainly, for the local area, Tesco will help the economy by providing jobs and giving consumers more choice with now extra competition to big market players including; Sainsbury’s and Asda.