For the last few years, Cyber Monday has been the biggest day for online shopping in the run-up to Christmas. This year for the first time Black Friday exceeded Cyber Monday sales. This suggests that the American event might become a permanent fixture in the UK Christmas calendar.

Black Friday saw Britain’s savvy shoppers log on to their devices in the early hours of Friday morning to secure the best and cheapest Christmas deals. On Friday traffic to retailer’s websites was up 60% last year. With Amazon reporting that Black Friday was its biggest ever trading day in the UK. The retail giant is said to have sold 64 items per second in their flash sale, with a total of 5.5m items being sold in 24 hours.

But it wasn’t just online retailers that had booming sales on Friday. High street retailers Tesco, Currys, Asda, Sainsbury’s and John Lewis enjoyed an increase in sales. For the last 5 years John Lewis has experienced strong Christmas sales, but this year John Lewis experiencing its busiest week in its 150-year history.

There was even brawling over the Black Friday deals where it got too much for some. Cheap Televisions were fought over in Asda. Shoppers wrestle over a television as they compete to purchase retail items on ‘Black Friday’ at an Asda superstore in Wembley, north London.

More Black Friday madness captured in Tesco Extra as shown in the video. 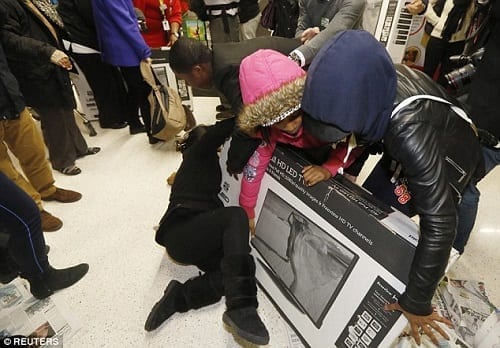 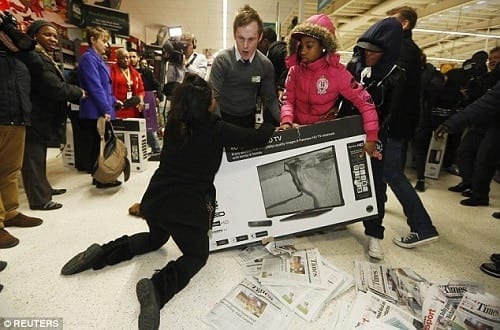 It seems Black Friday exceeded everyone’s expectations with an approximate £810m spent online in just 24 hours. Over the next few days, it’ll be interesting to see whether retailer’s sale figures show whether Black Friday simply just moved Christmas shopping forward for UK consumers who wanted to bag themselves an early Christmas bargain on payday weekend. Or whether this is the start of a shopping boom for UK retailers?

Did you make the most of the Black Friday sales last week? Or are you holding out until mid-December to start your Christmas shopping?

0
SHARES
8
VIEWS
FacebookTwitter
SubscribeGoogleWhatsappPinterestDiggLinkedinRedditStumbleuponVkPrintDeliciousBufferWeiboPocketXingTumblrMailMeneameOdnoklassnikiManagewpMailruLineYummlyFrypeSkypeTelegramFlipboardHackernews
This entry was posted in News. Bookmark the permalink.