As with every year, retailers tried to stay on track throughout 2015, and at the end of the year, we saw the culmination of all the biggest players’ efforts and planning. For some December was a great month that showed solid progress, and for others, it was a disappointment that might cause trouble for 2016.

On the winning team, two big players exceeded expectations in the ongoing battle of the supermarkets. Tesco has finally begun the show signs of turning around its fortunes with a 1.3% sales boost over the previous year, although until Christmas it was still struggling against the cheap discount shops. Morrisons is also attempting a recovery, reporting a small increase of 0.2% in sales. This was much better than the 3% decline that was predicted.

In the department stores arena, Debenhams had a positive end to the year with a 3.7% boost in like-for-like sales. They cited a move away from excessive discounts as a helpful factor, plus being careful not to fill their clothes rails with too much winter clothing. House of Fraser did even better with a 5.3% sales increase over Christmas, which it put down to an increased effort to improve its shop fittings and displays as well as its online presence.

There are also notable losers over the festive period, including Sainsbury’s which suffered a small drop in sales (although not as much as some expected). The supermarket is currently overhauling its pricing strategy gradually and claims the benefits will be seen further down the line. Waitrose also saw a fall in demand as groceries become an increasingly competitive area for them and their close rivals.

Primark and Next blamed the warm weather for a drop in sales compared with the previous year. Sports Direct tried the same reasoning for issuing a profit warning, although they also suffered from a lot of negative publicity throughout the year after a high profile investigation exposed poor conditions in their warehouses. Elsewhere, Marks & Spencer enjoyed strong food sales but this wasn’t sufficient to compensate for a fall in the rest of its sales, which experts have put down to the retailer failing to define its target audience in recent years. Argos also reported disappointing sales, although it will be interesting to see how their story develops in 2016 following a possible sale to Sainsbury’s.

In fact, as the year goes on we should start to see even more evidence of the trends emerging in retail right now. The quicker we adapt, the more likely we’ll able to succeed at these crucial times! To help get your retail displays up to scratch, boost your branding with custom clothes hangers, kit out your shop with exciting signage or show off your fashion products on high-quality mannequins, we have everything covered at Valentino’s Displays. 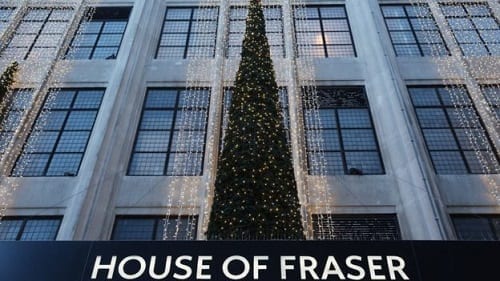