He might have sung about a ‘living doll’ but one super-fan has literally created her own ‘Sir Cliff’ living doll. A couple from Norwich have come up with a new way to keep car thieves at bay – by driving around with a life-sized Cliff Richard mannequin in the back of their car.

David Stolworthy has created his own life-size replica of the pop star using a waxwork of Cliff Richard’s head that he found at a car boot sale back in 2012. He then crafted the body himself out of a cushion and some MDF.

To make the honorary security guard look more ‘life-like’ the couple dress the doll up in a Norwich City football scarf and one of David’s old navy blue blazers. The ‘Sir Cliff’ mannequin also sports a pair of aviators while he sits in the back of Jill’s Peugeot 206.

The mannequin was created especially for David’s wife, Jill Stolworthy, to make her feel safer when driving at night so it looks like there is a male passenger accompanying her at all times. The dummy accompanies Jill to the shops, friends’ houses and even joins the couple on their continental summer holidays.

If you fancy driving around with your own honorary security guard in the car, then why not check out our range of flexible mannequins and stands! 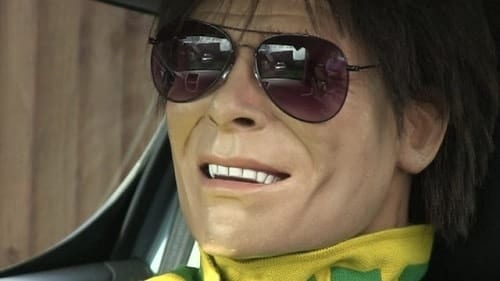