Whiteley shopping centre, off junction 9 on the M27 between Southampton & Portsmouth is due to open to the public on May 23rd 2013. An announcement today, February 4th 2013 revealed that the new 320,000sq ft shopping centre will be opening soon. Whiteley Shopping Centre is a £84 million development, comprising over 50 units, adjacent to an existing Tesco supermarket.

Some retailers have already started fitting out their stores. Valentino’s have already been supplying retailers their shop fittings & display equipment requirements for fashion display. Whether this is clothes rails, garment rails, clothes hangers or mannequins your be sure to find an extensive range of retail display at Valentino’s Displays.


High street chain Topshop and Topman were recently announced as the latest retailer at the Whiteley Shopping Centre alongside top fashion names including River Island, H&M and Next. A list of retailers to be at the new shopping centre in Whiteley include;

Cafés and restaurants include;

Back in July 2011, we brought to you the initial plans and redevelopment of the site. We look forward to the unveiling of the new shopping centre in Hampshire. Below is a view of the site plan for the shopping centre. 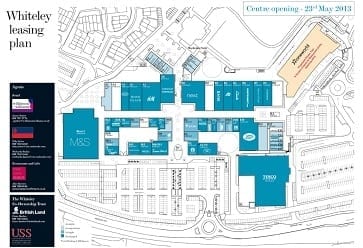