Primark apologises and removes ‘Skinny’ mannequin from their window

Primark has apologised and removed a shop window mannequin with protruding ribs from their Glasgow store after a disgruntled customer makes her thoughts about the mannequin known on social media.

It was brought to the attention of the public when Mel Fraser, a passer-by posted the picture of the ‘skinny’ mannequin on Instagram and questioned its use. Mel Fraser stated that it sent out a dangerous message and she would rather see mannequins of all shapes and sizes in shop windows.

The Instagram pictured soon went viral and caused an uproar on social media after it was shared 1400 times on Twitter. In the first instance, Primark responded to the tweet to say it was going to be investigated before following up to say the mannequins would not be used again.

@Melfyx We’re currently changing our window displays. The mannequins you describe will not be used in this way again.

In contrast to this, high street stores, including Debenhams, are undergoing plans to roll out larger sized mannequins across their stores in an effort to represent real body shapes and sizes.

What do you think about the skinny mannequin in Glasgow’s Primark store? Should mannequins represent different sizes? We would love to hear your views on the matter. 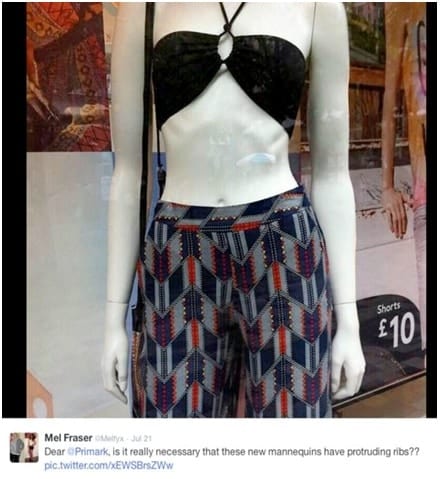