Have Sainsbury’s unveiled the best Christmas advert for 2014?

Have Sainsbury’s just managed to oust John Lewis & M&S in the bid for the best advertising campaign this Christmas. Sainsbury’s has teamed up with the Royal British Legion to create a heart-warming Christmas advert fitting for the 100th anniversary of the start of World War One. 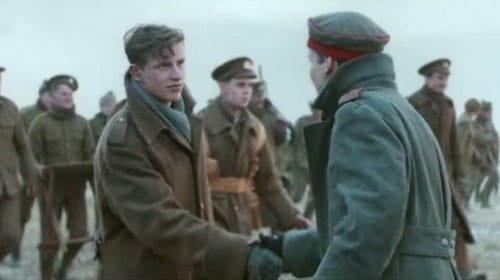 The British and German soldiers meeting in No Man’s Land. Credit: Sainsbury’s.

The supermarket giant unveiled its new seasonal promo last night with the ‘Christmas is for sharing’ ad set focusing on the events of Christmas 1914.

The video portrays the Christmas truce of 1914, where British and German soldiers ventured into No Man’s Land to greet one another and exchange gifts. It begins with the German troops singing Silent Night before the carol is taken up by the British men sitting just a few hundred yards away in their trench.

Eventually, a young British soldier tentatively raises his hands and walks out into No Man’s Land – so-called because so many were killed in the space between rival trenches.

The Christmas truce of World War One saw soldiers across the Western Front cease hostilities to exchange greetings and sing carols, with some areas even seeing men from both sides exchange gifts and play football.

In the Sainsbury’s advert, British and German soldiers both sing the carol Silent Night in their respective languages before crossing No Man’s Land to play football, with one British soldier giving his German counterpart a chocolate bar.

While some may question why the supermarket is using WWI as a promotional tool, the advert is a joint venture with the Royal British Legion. The chocolate bar featured in the advert will be on sale for £1, with all profits going to the charity. 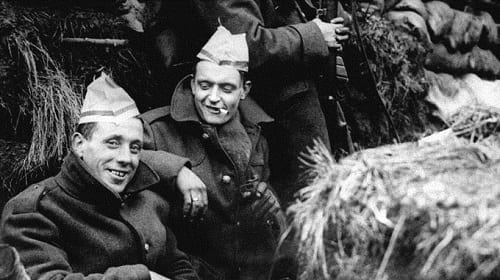